Mother of God at Hrushiv - Apparitions in the Ukraine 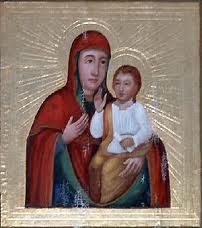 Mother of God at Hrushiv
History of Apparitions at Hrushiv

1637: According to Tradition The Blessed Virgin first appears during a time of war and the villagers plant a willow tree in honour of her visitation.

1790’s: A spring with healing powers miraculously appears beneath the willow tree, an icon of Our Lady is placed above the willow tree and Hrushiv becomes a place of pilgrimage. The authorities opposed it and had the stream contaminated.

1850’s: During an outbreak of cholera Our Lady appears to a local woman in a dream, commands her to reclaim the spring and have holy Mass celebrated there and in return the cholera epidemic ended. Sometime later following a vision of three tongues of fire above the spring a small chapel was built on the site dedicated to the Holy Trinity. It was upon this that current Holy Trinity Church was eventually built which became the site for the first modern apparition of Our Lady in 1987.

1914: On May 12, two weeks prior to onset of World War I Our Lady appeared to 20 people, asked for prayer, hope, fasting, and penance and told them that there would be a war, that Russia would become a Godless country and that Ukraine would suffer for eighty years and suffer three wars before becoming free again. The Shrine was closed after the Bolshevik revolution when Ukraine came under the control of the USSR.

1987: April 26-August 15, Spectacular public apparitions of Our Lady continued. During the first three weeks tens of thousands of pilgrims reported seeing Our Lady and hearing her messages. Between 40-80,000 pilgrims attended daily. Children saw angels flying, KGB officials and non-believers underwent miraculous conversions, and on one day over 52,000 embroidered prayer towls were left by the pilgrims as tokens of love and reverence

1988: April ?-July 7, apparitions of Our Lady resumed in Hrushiv

1988: After July 7 when apparitions ceased in Hrushiv they reportedly continued in other Ukrianian shrines
Click Here to Read More about this Apparition